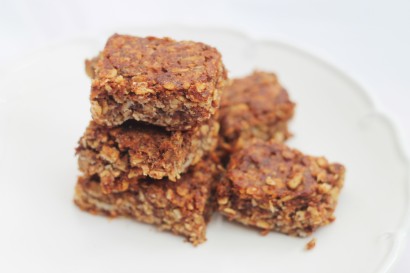 My friend just had a baby and was really determined to make breastfeeding work. I always found that the best gift anyone could bring me after having the baby was food. And healthy food. You don’t have time to cook so you just have to take whatever anyone gives you or whatever is convenient which usually means you eat really badly for the first few months. Not only is this not good for our bodies but of course whatever you eat goes through to your milk so it affects the baby too. One of my biggest struggles after having Braxton was trying to maintain my healthy diet when I was just too exhausted to cook and of course when he slept, I didn’t want to be in the kitchen, I wanted to sleep!

I also really struggled with breastfeeding – it didn’t come easily to me at all – but I got there eventually. I was told to eat lots of oats to increase my supply so I eventually got into the kitchen to make some flapjacks as the store-bought ones are just so full of sugar. They were so yummy and such an easy snack to have next to me during those early days of being absolutely ravenous every time he even approached my boobs! So I made these for my friend also and thought I’d share the recipe.

Preheat the oven to 180 degrees and line a silicone baking tin with baking paper and grease with coconut oil.

Soak your dates for about half an hour in purified water so they soften and once they’re soaking, mix the chia seeds with the water and leave aside to set.

Heat the coconut oil in a pan and add the peanut butter and maple. Once combined add the dates and mix, then put it all in a food processor.

Blend until smooth, then add the oats and chia mix and blitz a little bit but you still want the oats to be in solid pieces.

Tip into a bowl and add the sunflower seeds an mix around until they are evenly spread throughout the mixture.

Now spoon the mixture into the prepared baking tin and bake for 12-15 minutes. Check it at 12 minutes and see if the top is starting to go golden, if it is, take them out. They need to be moist and not overcooked.

Leave on a cooling rack until completely cool – if you cut them while they are hot they won’t stick together.

Once cool cut into squares and store in an airtight container.